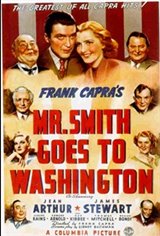 Frank Capra's classic comedy-drama established James Stewart as a lead actor in one of his finest (and most archetypal) roles. The film opens as a succession of reporters shout into telephones announcing the death of Senator Samuel Foley.

Taylor orders Hopper to appoint an interim senator to fill out Foley's term; Taylor has proposed a pork barrel bill to finance an unneeded dam at Willet Creek, so he warns Hopper he wants a senator who can't ask any questions or talk out of turn.

After having a number of his appointees rejected, at the suggestion of his children Hopper nominates local hero Jefferson Smith (James Stewart), leader of the state's Boy Rangers group. Smith is an innocent, wide-eyed idealist who quotes Jefferson and Lincoln and idolizes Paine, who had known his crusading editor father.

In Washington, after a humiliating introduction to the press corps, Smith threatens to resign, but Paine encourages him to stay and work on a bill for a national boy's camp. With the help of his cynical secretary Clarissa Sanders (Jean Arthur), Smith prepares to introduce his boy's camp bill to the Senate.

Defeated, Smith is ready to depart Washington, but Saunders, whose patriotic zeal has been renewed by Smith, exhorts him to stay and fight.

Smith returns to the Senate chamber and, while Taylor musters the media forces in his state to destroy him, Smith engages in a climactic filibuster to speak his piece: I've got a few things I want to say to this body. I tried to say them once before and I got stopped colder than a mackerel. Well, I'd like to get them said this time, sir.

And as a matter of fact, I'm not gonna leave this body until I do get them said.