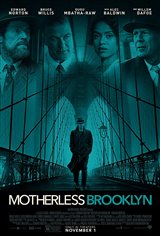 New York, 1950s. Lionel Essrog (Edward Norton) works for a detective agency owned by Frank Minna (Bruce Willis), his mentor and best friend. Lionel and his co-workers, Tony Vermonte (Bobby Cannavale), Gil (Ethan Suplee) and Danny (Dallas Roberts), were all orphans raised by nuns before being mentored by Frank. When Frank is shot dead in an alley during a routine sting operation, Lionel, who's afflicted with Tourette syndrome, is determined to solve the murder.

His search leads him to look into the possible involvement of New York’s city planning overlord Moses Randolph (Alec Baldwin), who wants to eradicate the slums and instead prioritize the city’s elites. During his investigation, Lionel meets Laura Rose (Gugu Mbatha-Raw), a community-minded lawyer who lives above a nightclub in Harlem. She becomes fearful that she's being targeted, as she comes to realize she's more deeply involved than she could have imagined.

Based on the novel by Jonathan Lethem.