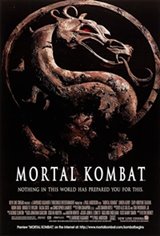 For nine generations an evil sorcerer has been victorious in hand-to-hand battle against his mortal enemies. If he wins a 10th Mortal Kombat tournament, desolation and evil will reign over the multiverse forever.

To save Earth, three warriors must overcome seemingly insurmountable odds, their own inner demons, and superhuman foes. Lord Rayden has rescued them, but he cannot fight for them. A martial artist, an action film star and a soldier are the chosen three. With the world's fate on their shoulders, they compete to save us all in the body-slamming, mystical-tinged, full-tilt spectacle of creatures and conflict that is Mortal Kombat.

Based on the popular video game.