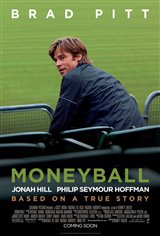 Billy Beane was a promising high school baseball player drafted by the New York Mets in 1980 for $125,000. Unfortunately, though he'd been at the top of the game in his high school league, his talent wasn't enough for the big leagues. Despite that, he played 148 games and almost six seasons in the major leagues as a free agent—with the Mets, the Minnesota Twins, the Detroit Tigers and the Oakland Athletics.

In 1990, he asked the A's General Manager Sandy Alderson for a job as an advance scout. He spent three years as a scout before getting promoted in 1994 to the Assistant GM of the A's.

When the team's owner, Walter A. Haas Jr., died in 1995, new owners Stephen Schott and Ken Hofman decided the team's salaries had to be cut. Alderson began incorporating sabermetric principles in drafting new players. Sabermetrics is a scientific baseball term that means the analysis of how many runs a player has generated—for example, not just runs batted in, but other means such as sacrifice fly balls, bunts or stolen bases—rather than focusing on his batting average or other traditional measurements of baseball skill.

Beane continued to use sabermetrics when he took over as GM in 1998, in order to craft a team that was inexpensive, but successful, by finding talented players undervalued by the market. The Oakland A's spent $41 million on salaries in 2002, but were able to remain competitive with the New York Yankees, who yearl spent over $125 million in salaries. The A's finally won a series in 2006, when they swept the Minnesota Twins in the American League Division Series. Unfortunately, they were then swept by the Detroit Tigers in the American League Championship Series. They have yet to win a World Series.

Beane has signed a contract that will see him remain on as general manager through 2012, and he was also awarded a small portion of the team's ownership.

In 2003, author Michael Lewis' book, Moneyball: The Art of Winning an Unfair Game, about Billy Beane and the Oakland A's, was released. The book details the concept of sabermetrics and the A's methods of selecting players. It has had a huge impact on professional baseball, to the point where teams using sabermetrics are said to be playing "Moneyball." Not everyone believes in sabermetrics, preferring the traditional approach to player selection, but teams such as the New York Mets, New York Yanks, Toronto Blue Jays, San Diego Padres, Boston Red Sox and the Cleveland Indians have all hired full time Sabermetric analysts.

The 2011 movie based on the book, which features Brad Pitt as Billy Beane, incorporates a fictional character played by Jonah Hill, who teaches Beane about sabermetric methods and employs the science with success.