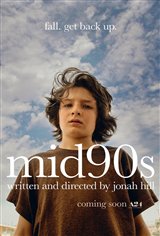 Stevie (Sunny Suljic), 13, lives in Los Angeles in the 1990s and feels dissatisfied by his troubled home life, where he is constantly tormented by his violent older brother, Ian (Lucas Hedges). Their single mother, Dabney (Katherine Waterston), doesn’t try to intervene and help Stevie, which upsets him even more. One day, while wandering the streets of L.A. alone, he comes across a group of older skateboarders outside the Motor Avenue skate shop. Intrigued by their comradery and familial relationship, Stevie decides he wants to join their gang but is unsure how to go about doing this.

As he continues to linger around the group in the hopes of befriending them, Stevie gradually finds himself accepted by the teenagers, who dub him "Sunburn." Now a part of this gang of rough skateboarders, the young boy begins to adapt himself to their ways and tries to prove himself worthy of their friendship, all while attempting to stay afloat in their troubling world of sex, drugs and dangerous stunts.