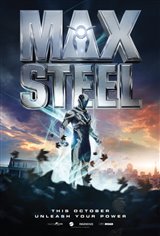 Max McGrath (Ben Winchell) is a 16-year-old teenager desperately trying to fit into the new town he has moved to. But soon, he discovers he's been given energy-manipulating super powers by his late scientist father.

When he meets an extraterrestrial entity named Steel, he is trained by Steel to use his powers, and they learn that they can both harness and combine their powers to evolve into the superhero Max Steel, who possesses powerful unworldly strength. As the two unlikely friends struggle to accept their oddly connected fates, they begin to uncover unimaginable secrets, while finding themselves hunted by sinister forces from another galaxy who want to control Max’s powers.