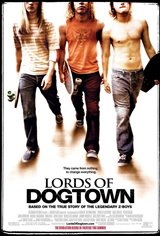 Watch Trailer
The tough, gritty streets of “Dogtown” in Venice, California didn’t look like much to outsiders, but to a handful of teenage surfers in the 1970s they were the hard, winding, sloping inspiration for a revolutionary style of skateboarding. Transferring the aggressive wave-riding moves to concrete from their death-defying surfing skills at the Pacific Ocean Park pier, the Z-Boys -– mostly kids with rough home lives and rougher attitudes -– became sensations, local legends.

They were freestyle wizards on urethane wheels, turning empty pools into arenas of wild, beautiful athleticism, the genesis of today’s “extreme sports.” Skating competitions didn’t know what to make of them, girls threw themselves at them, and suddenly marketers and promoters wanted to grab a piece of them and what was fast becoming a worldwide counterculture phenomenon. But would the friendships of this tightly knit group last as a teenage pastime turned into big business, and energetic personalities became out-of-control celebrities?