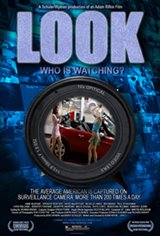 The Post-9/11 world has forever changed our notion of privacy. There are now approximately 30 million surveillance cameras generating more than four billion hours of footage every week in the United States. And, the numbers are only growing.

The average American is captured over 200 times a day--in department stores, gas stations, changing rooms, and even public bathrooms. No one is spared from the relentless, unblinking eye of cameras hidden in every nook and cranny of day-to-day life. Shot entirely from the point of view of the security cameras.

Adam Rifkin's "Look" follows several interweaving, storylines over the course of a random week in a random city. A high school English teacher tries his best to be a decent husband; a department store floor manager uses the warehouse for more than just storage; a Mini-Mart clerk has big dreams; a lawyer struggles with a sexual dilemma; and two sociopaths thrive on ruining the lives of random strangers. "Look" tells five private stories which unfold before the prying eye of the covert camera to chilling effect.

We all choose to hide aspects our lives from those around us, whether it is as benign as picking our noses in an empty elevator or something much darker. "Look" poses the pivotal question: Are we always alone when we think we are?