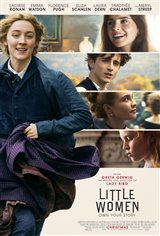 During the Civil War in America, we are introduced to the March sisters — a now-married Meg (Emma Watson), New York City writer Jo (Saoirse Ronan), and painter Amy (Florence Pugh), who is living in Paris with Aunt March (Meryl Streep).

Taking us back seven years, we see the March sisters living under one roof. Meg, Jo and Amy are living with their painfully shy sister Beth (Eliza Scanlen) and their mother Marmee (Laura Dern), while their father (Bob Odenkirk) is away serving in the Civil War.

The girls are thrilled to get a new next-door neighbor, Laurie (Timothée Chalamet), who immediately becomes a fan of the March sisters, but especially of the always flirting and teasing headstrong Jo. The movie follows the fate of each sister, as they each choose to follow their heart.

Based on the classic novel by Louisa May Alcott.