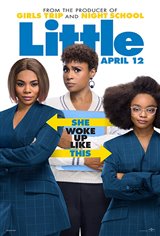 Jordan Sanders (Regina Hall), a nasty, self-important boss, bullies her staff and drives them crazy with her unreasonable demands. She's not only mean to the point of being evil, she actually physically assaults her employees. When a 13-year-old girl calls her out on her destructive behavior, Jordan brushes her off with her usual arrogance.

The little girl casts a spell on Jordan who, when she wakes up the next morning, finds she's reverted to being a 13-year-old girl (Marsai Martin). Not only does no one respect the new Jordan, but Child Protective Services orders her to attend school. Desperate, Jordan asks her assistant, April (Issa Rae), to cover for her at work, as well as pose as her guardian. However, Jordan has a difficult time being a child again, making things extremely awkward for the adults around her, including April.