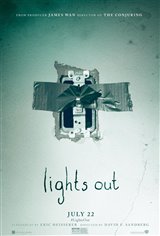 A little boy named Martin (Gabriel Bateman) is seeing a woman in the shadows every time he turns off the lights. He's not the only one who sees her. He learns that his big sister Rebecca (Teresa Palmer) also used to experience the same thing.

It turns out that their mother Sophie (Maria Bello), while in a mental institution as a child, made friends with a girl named Diana whose skin had a strong negative reaction to bright light. While undergoing light therapy, she died. Diana has returned from the dead and wants Sophie all to herself. Nothing can stop Diana from tormenting the entire family. They get so desperate that they even call in the police, but not even armed authorities can put a stop to Diana.