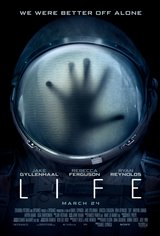 The six-person crew aboard the International Space Station includes Roy Adams (Ryan Reynolds), David Jordan (Jake Gyllenhaal) and others. They're initially excited when a Rover discovers the first evidence of life on Mars. Contained in a petri dish, the alien life form is taken aboard their ship.

The crew is elated, but their excitement soon takes a turn when the creature, which initially appeared harmless, attacks one of the astronauts (Ariyon Bakare). The sudden attack creates terror and uncertainty among the crew as they try to figure out what to do in order to make sure the alien does not come with them back to Earth, where it could become a massive threat to humans.