Lies My Father Told Me 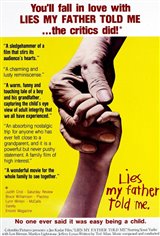 Growing up in 1920s Montreal is no picnic for Orthodox Jewish boy David Herman (Jeffrey Lynas). His grandfather (Yossi Yadin) is a wizened old junk dealer and the only person who plays attention to the lonely David. He is also the only adult who treats David like a friend and equal instead of a nuisance.

This sensitive, perceptive drama obviously meant more than a mere residual check to scriptwriter Ted Allen, who also appears in the film. David's parents are played by Len Birman and Marilyn Lighthouse, two of Canada's most respected actors. The film won a Golden Globe for Best Foreign Film and at the 1976 Canadian Film Awards, the picture won Best Feature Film and Marilyn Lightstone won Best Performance by a Lead Actress.