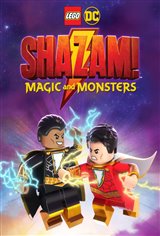 There’s a new hero in town – Shazam! (voice of Sean Astin) – whose alter-ego also happens to be just 10-year-old Billy Batson. While he is fighting off evil, it doesn’t take long for his powers to be noticed by the Justice League.

The group invites Billy to be one of them, but to do so, he must reveal his true identity. Billy must learn how to trust others, while fighting off the evil Mr. Mind and Black Adam alongside the Justice League.