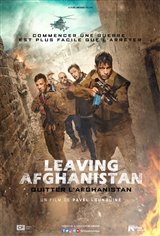 In 1988, the Red Army prepares to leave Afghanistan, when after nine years of intense fighting, their mission is suddenly interrupted by the risk of the collapse of the Soviet Union. The soldiers of the 108th Motorized Infantry Division are then charged with a final mission: to find the son of General Vassiliev, a pilot who ejected from his plane before it crashed, and who has been since held hostage by the Mujahedin warriors. But the mission is complicated by the fact that the aircraft crashed in a particularly dense and difficult to access region, which is controlled by Hochem, a legendary rebel leader, who’s unwilling to collaborate with the Soviets.