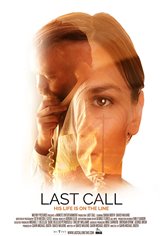 Scott (Daved Wilkins), a middle-aged, lonely and bitter alcoholic, calls a suicide prevention hotline, but accidentally dials the wrong number and gets Beth (Sarah Booth), a night-time cleaner, instead. She feels inconvienced at first, because after all, this is not her job. But when he tells her it's the anniversary of his son's death, something stirs inside Beth, who has sons of her own, including one that she's just discovered didn't make it to the sitter.

She tries to get Scott to talk about his daughter, but he tells her he thinks about dying. All the time. Although she's not trained to handle this kind of situation, Beth tries to keep Scott on the line, hoping to help him through this difficult time.

This movie was shot in real time and is shown in split screen throughout their conversation.