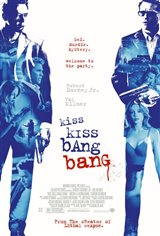 Harry Lockhart (Robert Downey Jr.) is basically a decent guy. Sure, he's a petty thief who skates through life on a shaky cocktail of dog-eared charm and cockeyed optimism, but he wants to do the right thing. He just doesn't know how, exactly.

Harry's perpetual bad luck takes a turn for the better when he and his partner are doing some after-hours Christmas "shopping" at a New York City toy store and the security alarm breaks up the party. In making his frantic getaway from the cops, Harry inadvertently stumbles into an audition for a Hollywood detective movie, and faster than you can say Jack Robinson, the producer flies him to Los Angeles for a screen test.

Thrust into the cutthroat world of L.A.'s pros, cons, losers and wannabes, Harry is teamed with tough-guy private eye Perry van Shrike (Val Kilmer), AKA "Gay Perry," to prepare him for his screen test. Gay Perry is ruthless, relentlessly tough and -- you guessed it -- gay. He also has little patience for Harry, who tries out his acting skills by passing himself off as a detective.

It seems like nothing short of destiny when the thief trying to be an actor impersonating a detective crosses paths with Harmony Faith Lane (Michelle Monaghan), an aspiring actress who needs his help. When the mysterious suicide of Harmony's sister intersects with a seemingly unrelated case that Harry and Gay Perry are investigating, they suddenly find themselves embroiled in a real-life murder mystery.