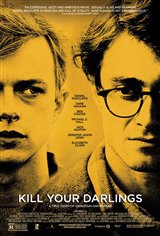 In 1944, a young and inexperienced Allen Ginsberg (Daniel Radcliffe) enrolls in the prestigious Columbia University to pursue an English major. He meets the unconventional and rebellious Lucien Carr (Dane Dehaan), and is fascinated by him. Allen and Lucien develop a close bond, and they make friends with William Burroughs (Ben Foster) and Jack Kerouac (Jack Huston).

Together, the bold group goes on extravagant adventures, experimenting with drugs and other exploits. Allen discovers that the force behind Lucien’s brilliance is an older man and English teacher, David Kammerer, who helps him with his papers. Allen also notices that David is infatuated with Lucien and makes the assumption that the two were involved together at some point.

It becomes more and more obvious that Lucien is only using David for his own benefit, and in a confrontation, Lucien stabs him to death in what he claims is self-defense. He later confesses to the crime and involves his friends Jack and William in the trial. Allen writes about the crime in a term paper, and he ultimately has to make a choice between conformity and liberation.