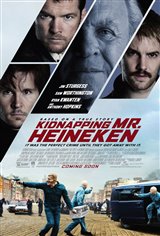 In 1983, five friends and business associates conspire to kidnap Dutch brewery magnate Freddy Heineken (Anthony Hopkins) and hold him for what was the largest ransom at the time.

They soon realize they’ve bitten off more than they can chew when they find themselves on the run from cops as they try to hold out for a ransom. Each of them is tested as to how far they are willing to go.

Based on crime journalist Peter R. de Vrie's account of what has been called "the most notorious kidnapping of the 20th century."