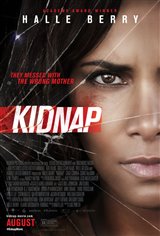 Karla McCoy (Halle Berry) lives a fulfilled life with her young son Frankie (Sage Correa). While in the park with Frankie one day, whenever he wanders too far, she calls "Marco," and he responds with "Polo." However, when she gets a call from her lawyer and answers it, she takes her eyes away from Frankie long enough for him to be grabbed by a stranger. By the time she spots him, he's being pulled into a car by a kidnapper and driven off.

She rushes to the police station, where she's told to wait while they file a report. But when she sees all the posters for other missing children, she realizes that waiting was probably all that the other parents did. Karla is not one to play the waiting game, and goes on a relentless pursuit to find the kidnapper and get Frankie back herself.