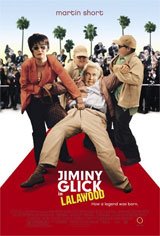 Jiminy Glick (Martin Short), a self-absorbed entertainment critic for a television station in Butte, Montana makes his first trip to the Toronto International Film Festival. His dreams of becoming the most celebrated and renowned star interviewer are realized when he is granted an exclusive with elusive young megastar Ben DiCarlo (Corey Pearson). This catapults Jiminy from obscurity to being the most talked about guy in town. But fame embroils Jiminy in a murder mystery whodunit when the body of fading Hollywood star Miranda Coolidge (Elizabeth Perkins) is found in his bed.