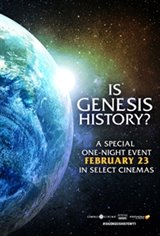 Fathom Events is excited to bring enlightening documentary, Is Genesis History?, to cinemas nationwide for a special one-night event on Thursday, February 23.Dr. Del Tackett treks the globe to meet with top scientists and scholars and asks the questions surrounding the most controversial book of the Bible that everyone is curious about: Was everything created in six days?

Did we evolve from apes? Were Adam and Eve real? Was there a global flood? What happened to the dinosaurs? Was there a tower of Babel?This first-of-its-kind documentary seeks to throw new light on the origin of man and his true history as revealed in Genesis.