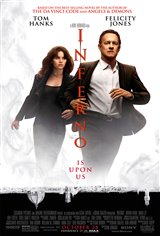 Harvard symbologist Robert Langdon (Tom Hanks) wakes up in a hospital room in Florence, Italy, with a wound on his head and no recollection of the last 48 hours. Physician Sienna Brooks (Felicity Jones) explains that he's suffering from temporary amnesia. Before he has time to figure out what’s happening to him, he learns he is being chased by the World Health Organization and a private security firm. A fan of Langdon, Sienna decides to tag along and help him solve the mystery.

Langdon soon finds out that billionaire Bertrand Zobrist (Ben Foster) is too invested into the future of mankind and has plotted a deadly global genocide scheme. It is now up to Langdon to solve the clues left behind by Zobrist and save mankind from destruction.

Based on the book by Dan Brown.