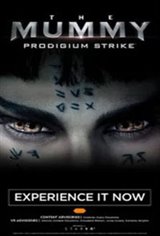 Play an exciting and pivotal scene from Universal Studios' 2017 film, The Mummy, as a Prodigium Agent tasked with capturing the ancient princess Ahmanet, while battling hordes of ravens, spiders and undead. From a helicopter hovering above and from the thick of the action on the ground, you must protect your fellow agents as the Mummy grows in power.

It's a battle to the finish to either capture her or be her slave for eternity!