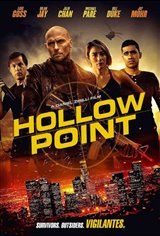 Dr. Cooray (Dilan Jay) is an ethics professor who one day tragically loses both his wife and daughter in a senseless act of murder. Having also killed every witness to his crime, the murderer walks free, causing Dr. Cooray to act in revenge and take matters into his own hands, which ultimately leads to his imprisonment.

While in prison, Dr. Cooray is visited by Hank Carmac (Luke Goss), the leader of a group of vigilantes. Hank helps Dr. Cooray earn back his freedom in court, and recruits him to join his team of vigilantes. With the team, Dr. Cooray is able to track down the bigger figures who were behind his family's murder, but along the way, he learns that the only language Hank and his team speak is violence, and they are obsessed with it. In his own quest for vengeance and justice, Dr. Cooray must confront his own personal dilemma and decide whose side he is on.