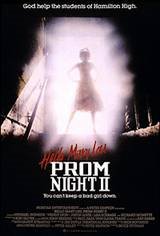 Though not a true sequel to Paul Lynch's derivative slasher-dud Prom Night, this Carrie-flavored horror film begins in 1957 with the fiery death of bitchy prom queen Mary Lou Maloney (Lisa Schrage) courtesy of a backfired stinkbomb stunt pulled by her jealous ex-boyfriend. Thirty years later, her killer has become the school principal (Michael Ironside), and sweet, innocent Vicki (Wendy Lyon) is a contender for the prom-queen title.

Mary Lou's vengeful spirit spies the perfect opportunity to reclaim her crown once and for all. The rest of the film involves Vicki adopting Mary Lou's less-than-reputable habits and messily destroying anyone who stands between her and the coveted title.

High points include a telekinetic Tutti Frutti locker-room squashing and a swirling demonic blackboard, all courtesy of FX wizard Jim Doyle, who worked previously on A Nightmare on Elm Street, to which this film bears some stylistic similarities.