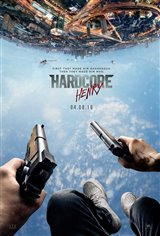 When a man wakes up with no memory of his past, he's told his name is Henry. He's also told that he's now a cybernetic super-soldier resurrected from the dead. Here's where the electrifying action kicks off and doesn't subside until the credits roll.

Henry is informed that his wife Estelle (Haley Bennett) has been kidnapped and he's assigned to save her. Her captor is Akan, a powerful warlord with his sights set on world domination. Everyone is gunning for Henry (literally), except his only ally, a mysterious British man named Jimmy (Sharlto Copley). Or is he an ally? Set in Moscow, this riveting thriller promises to have audiences gripping their armrests and clenching their jaws.