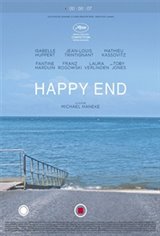 Anne Laurent (Isabelle Huppert) has taken over the successful family construction and transport business from her aging father Georges (Jean-Louis Trintignant), who is suffering from dementia. He's tended to by the family's Moroccan servants, whom he subjects to racist condescension. For her part, Anne is engaged to a British lawyer (Toby Jones), for whom she has no apparent affection.

Anne’s son Pierre (Franz Rogowski), who has the title of site supervisor but is actually a drunken deadbeat, allowed a catastrophic accident to occur through his negligence, which has subjected the firm to a huge civil suit. Meanwhile, Anne’s brother Thomas (Mathieu Kassovitz) has secrets of his own. When his ex-wife lands in the hospital due to a mysterious drug overdose, he has to look after his sullen 13-year-old daughter Eve (Fantine Harduin), whom he's neglected for years and who is also harboring a huge secret.

In French with English subtitles.