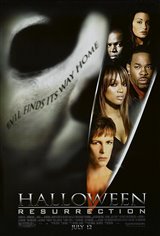 Three years ago, Laurie thought she had destroyed her brother, the legendary psychotic killer Michael Myers, for good. She was wrong - dead wrong. After killing an innocent man, she was locked away and hasn't spoken a word since. The staff believes her to be suicidal. But Michael has other plans for Laurie...

Back in the sleepy town of Haddonfield, Illinois, Freddie Harris, an ambitious entrepreneur, is ready to make some money with his new "reality" Internet event called Dangertainment. He's recruited six local college students to take part in his webcast. The "danger" arises when the students find out they have been picked to spend the night in the childhood home of Michael Myers.

Halloween arrives and the group prepares to enter the run-down house. The cameras are on and the broadcast is live as the group sets out to explore the secrets of the Myers house. Outside in the garage-based control room, Freddie and his assistant Nora are ready for some Halloween fun of their own. But what the group doesn't know is that Michael Myers has come home - and he's ready to clean house!