Haikyu!! The Movie: Battle of Concepts 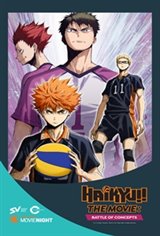 Based on the 3rd season of the popular TV anime series Haikyu!!, the compilation film focuses on the Karasuno High Boys volleyball team preparing for their final face off to represent the prefecture in the volleyball national championship.

Despite being known as "The Fallen Champions", Karasuno High boys volleyball team is highly determined to take down the powerhouse, Shiratorizawa High boys volleyball team. As Hinata comes closer to fulfilling his promise of defeating Ushijima's team, will the "Flightless Crows" finally find their wings and soar above the best school in the prefecture?