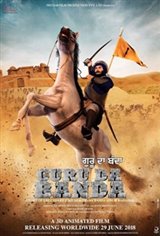 Guru Da Banda is an upcoming animated Punjabi movie based on the life of the great warrior of Sikh history, Baba Banda Singh Bahadar.

Banda Singh Bahadur established a monastery at Nanded, on the bank of the river Godavari, where in September 1708 he was visited by, and became a disciple of, Guru Gobind Singh, who gave him the new name of Banda Singh Bahadur after initiating him into the Khalsa.

Armed with the blessing and authority of Guru Gobind Singh, he came to Khanda in Sonipat and assembled a fighting force and led the struggle against the Mughal Empire.