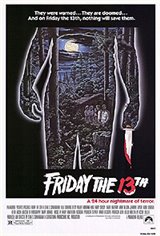 In 1957 at Crystal Lake camp, a boy named Jason Voorhees drowned. The following year, two amorous camp counselors were murdered. The camp remained closed for 20 years, when Crystal Lake was finally reopened by Steve Christy (Peter Brouwer) with the help of a few eager new counselors.

Ignoring warnings from a local wacko, the murders begin again as the counselors get picked off one by one, during a dark and stormy night. It is revenge what the killer is looking for? Who will survive the nightmare and live to tell the story?