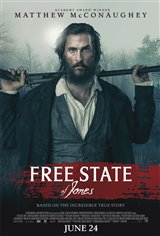 A Mississippi blacksmith named Newton Knight (Matthew McConaughey) is working as a nurse during the American Civil War when his terrified young nephew Daniel (Jacob Lofland) shows up. His family's home has been looted by soldiers and the young boy was told he was drafted, but rather than stay with a company where he knew no one, Daniel decides to search for his Uncle Newt.

Newt joins Daniel in battle for the sole purpose of keeping him out of harm's way, but his attempts prove futile when Daniel is hit by an enemy bullet and dies, despite Newt's frantic efforts to save him.

Disillusioned, Newt deserts and inspires several fellow soldiers, as well as runaway slaves, to join him in his anti-Confederate rebellion. The uprising eventually leads Jones County, Mississippi to break free from the shackles of Confederacy and establishes Newton as a fervent and caring leader.

During his epic fight, the defiant Newt falls in love with a slave named Rachel (Gugu Mbatha-Raw).