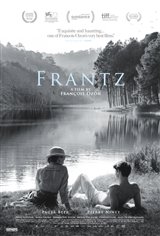 In a small German town, a young woman named Anna (Paula Beer) makes daily visits to the grave of her fiancé, Frantz, who was recently killed in France during battle in World War I. While mourning one day, Anna forms a bond with a mysterious Frenchman named Adrien Rivoire (Pierre Niney), who has also been placing flowers on Frantz’s grave.

Anna introduces herself, and discovers Adrien and Frantz were friends in Paris before the war began. Anna and Adrien grow close as they bond over their memories of Frantz. When Adrien returns to Paris, they keep in touch through letters. But when a letter to Adrien is returned unopened, Anna goes to search for him.