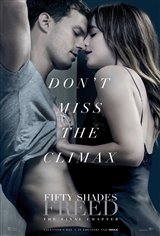 Christian (Jamie Dornan) and Ana (Dakota Johnson) honeymoon on the French Riviera, where they enjoy the beach, bicycling through Paris and sightseeing in the south of France. When there's a break in at Christian's headquarters, they have to return early. Security tapes show the perpetrator to be Ana's old boss, Jack Hyde (Eric Johnson), who tried to steal computer files.

As Christian's wife, Ana learns to be stronger as she has to deal with staff, including Gia, a young architect who does all she can to seduce Christian, despite his obvious disinterest. Ana rises to the challenge but when she learns she's pregnant and tells Christian, his reaction is disappointing and causes strain in their relationship.

When Christian goes out of town on business, Jack tries to kidnap Ana but when he fails, he kidnaps someone close to her and demands that Ana pay $5 million ransom and deliver it herself, or he'll kill his victim.