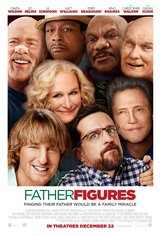 When fraternal twin brothers Kyle (Owen Wilson) and Peter (Ed Helms) arrive at their mother Helen's wedding, they discover that she made up the story about their father dying from colon cancer. In reality, she isn't even sure who he is.

They set out on a road trip to find him and go through a list of potential fathers, including former football quarterback Terry Bradshaw, and a man named Roland Hunt (J.K. Simmons), who insists there's no way they're his sons. But as they continue their crazy road trip, Helen tries to convince the boys to stop their search, as she believes their father's identity is irrelevant.