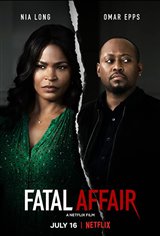 Ellie (Nia Long) and her husband Marcus (Stephen Bishop) have just moved out of the city into a beautiful new house. She wonders if it's a mistake, because she feels like she and Marcus have lost the connection they once had. Soon after, she bumps into an old friend, David (Omar Epps). It's been 20 years since they last saw each other, so they decide to meet up for drinks later to catch up.

She confides in him that sometimes, she feels like she's sleeping with a stranger, which gives him the courage to make a move. She nearly gives in, but at the last moment backs out and returns home, feeling guilty about what she almost did. However, David keeps contacting her, even when she blocks his number. He tells her they were meant to be together and no matter how often she rebuffs his advances, he won't give up, to the point where she feels her life and the lives of those around her are in danger.