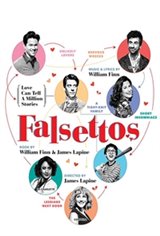 Nominated for five 2017 Tony Awards, including Best Revival of a Musical, Falsettos is a hilarious and poignant look at a modern family revolving around the life of a gay man Marvin, his wife, his lover, his soon-to-be-bar-mitzvahed son, their psychiatrist, and the lesbians next door.

Originally created under the specter of the AIDS crisis, this timely musical about middle-class family dynamics manages to remain buoyant and satirically perceptive even as it moves towards its heartbreaking conclusion.