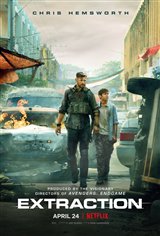 When Tyler Rake (Chris Hemsworth), a fearless black market mercenary with nothing left to lose is asked to take on a dangerous job, he accepts without hesitating. Ovi Mahajan, the 14-year-old son of an imprisoned international crime lord, Ovi Mahajan Sr., has been kidnapped by another ruthless rival crime lord. The boy, whose security guard Sanju is a former black ops member, slipped out to go to a club late one night, and that's when he was grabbed.

When the boy's father threatens Sanju's own son if Sanju doesn't get Ovi back in one piece, Sanju has a dilemma. He knows the companies who do these kind of extractions don't come cheap, and the imprisoned Mahajan Sr. doesn't have the funds to cover it. So he sends the company half the money and decides he'll take over halfway. Unfortunately, this puts the boy's life even further in danger.