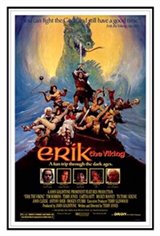 An unusually principled young Viking becomes increasing uncomfortable with all the killing and plundering that goes with the job, and sets out on a magical journey in order to bring about world peace. Former Monty Python member Terry Jones attempts to have his story of Erik's seemingly hopeless quest operate as both witty, lunatic satire and sincere children's fantasy. However, despite a good cast and some interesting design elements, the film fails to completely succeed at either of its goals.