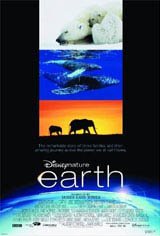 The first film in the Disneynature series, earth, narrated by James Earl Jones, tells the remarkable story of three animal families and their amazing journeys across the planet we all call home. earth combines rare action, unimaginable scale and impossible locations by capturing the most intimate moments of our planet's wildest and most elusive creatures.