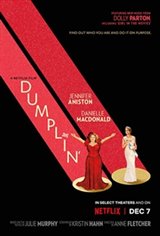 Teenager Willowdean (Danielle Macdonald) lives in the tiny shadow of her former pageant queen mother Rosie (Jennifer Aniston), whose nickname for the girl is "Dumplin'."

Rosie keeps busy helping run local pageants, which doesn't leave her much time for Willowdean. Tired of being overlooked, Willowdean and her best friend, Ellen (Odeya Rush), decide to enter a pageant as a form of protest. However, when Willowdean's decision to enter the pageant inspires another plus-d girl, Millie (Maddie Baillio) to also enter because being in a pageant has always been a dream for her, Willowdean is dismayed. She never meant to be an inspiration.

However, along with rebel Hannah (Bex Taylor-Klaus), who joins as a form of protest because she doesn't like the way pageants objectify women, the girls form a close friendship as they learn that there's more to being a beauty queen than they could have ever dreamed.

Based on the novel by Julie Murphy.