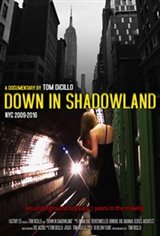 Tom DiCillo's latest film, Down in Shadowland, was made over the course of 7 years. It is perhaps the most independent of this independent director's films.

He made the film entirely by himself, motivated by a fascination with the secret lives of people on the subway that began when he first moved to NYC in the mid '70's. What resulted is a hauntingly beautiful hybrid of the documentary form.

Although every frame in the film is real, the film refuses to settle into the rational world of the traditional documentary. Instead, DiCillo's roving yet unobtrusive camera mingles with the denizens of this subterranean microcosm, working its way through a dense network of human emotion to achieve a truth that becomes more elusive and poetic.