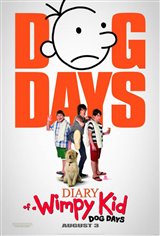 School is out and Greg Heffley (Zachary Gordon) is excited to get started on his summer plans. His idea of a great holiday is spending every day playing video games, but his father Frank (Steve Zahn) would prefer him to be outdoors.

Greg is banned from television and video games for the whole summer when he fails in his attempt to trick his father into thinking he's getting all the fresh air and exercise a growing boy needs. Meanwhile, Greg's mom Susan (Rachael Harris) encourages Frank to spend more time with his son. In an attempt to do so, Frank tries to share some of his interests with Greg, like fishing and re-enacting the Civil War.

Greg's best friend Rowley Jefferson (Robert Capron) invites him to spend the summer at the country club. Excited about the free food, swimming pools, and the fact that his crush Holly works there, Greg accepts. Unfortunately, his plans are soon foiled when he gets kicked out of the club.

Based on the third and fourth books from the "Diary of a Wimpy Kid" series.