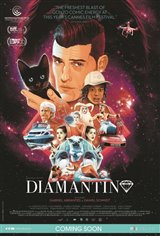 When Portugal's star soccer player Diamantino Matamouros (Carloto Cotto) misses a crucial penalty shot during the World Cup, he breaks down in tears in front of the flabbergasted crowd. Convinced that his genius ability to play soccer is now in the past, Diamantino, who only learned the day before about refugees, war and climate change when he spotted several refugees in danger out on the ocean from the deck of his yacht, decides to help them.

He adopts a refugee from Mozambique, who claims to be a teen boy named Rahim. He welcomes Rahim into his mansion, never suspecting that the boy isn't a boy at all, but an undercover lesbian Secret Service agent sent by the Portuguese government to investigate a money-laundering operation run by Diamantino's evil, money-grubbing twin sisters.