Dexter: The Complete Series on Blu-ray 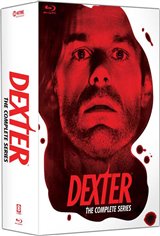 His mother was murdered when he was three, and over the years, Dexter, who has trouble feeling normal emotions, developed homicidal and psychopathic tendencies. In order to quench his thirst for blood, Dexter kills, but only the worst criminals he can find, including rapists, child molesters, mob enforcers and other serial killers.

This collection includes all eight seasons and 96 episodes on 24 discs.