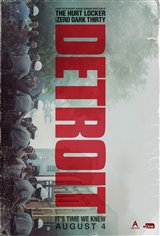 In the summer of 1967, a handful of rioters took over the city of Detroit following a police raid on an unlicensed bar. Army paratroopers, National Guardsmen and state and local police were called on to help put a stop to the rioting, which lasted for five days.

What sparked the riots was the racism and discrimination by the police force that was felt within the city by the African American population. In the end, 43 people were dead, almost 1,200 were injured and over 2,000 buildings destroyed.