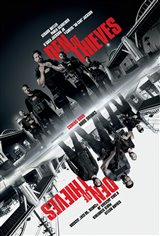 A notorious crew of bank robbers decide to pull off the ultimate heist. They want to get their hands on billions of dollars of cash that is taken out of circulation each day and destroyed by the Los Angeles Branch of the Federal Reserve. The bank has never been robbed, but if they can pull off this latest heist, they'll wind up with money that's virtually untraceable.

However, police officer "Big Nick" O'Brien (Gerard Butler) and his team are hot on their tail. The thieves have pulled off a string of successful heists and if the police can stop them in their tracks during the process of a robbery, they can solve a number of crimes all at once.