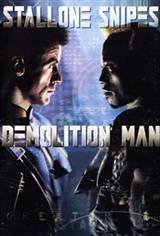 The plot of this action film begins in 1996, with Los Angeles in a violence-crazed conflagration. One of the LAPD's most notorious cops, John Spartan (Sylvester Stallone), known as the demolition man, is in hot pursuit of blonde-haired psychopath Simon Phoenix (Wesley Snipes), who is so nasty he even kills sometimes just because he feels cranky. John captures Simon, but not before Simon kills innocent hostages. John is blamed for the deaths of the hostages, and both he and Simon are cryogenically frozen to remove their brand of ultra-violence from a society that is simply just too violent. The film shifts to the future world of 2032, where Los Angeles has become a megalopolis called San Angeles. There is no poverty, Arnold Schwarzenegger was (at one time) president of the United States, and Taco Bell is the sole survivor of the Franchise Wars. Into this peaceful and bland society, Simon is summarily defrosted by reigning benevolent dictator Dr. Cocteau (Nigel Hawthorne) to have Simon murder Edgar Friendly (Denis Leary), the leader of a group of underground rebels. But Cocteau bites off more than he can chew when the melted-down Simon proceeds to go on a murder-and-looting spree. Reluctantly, Cocteau defrosts John to hunt down his old adversary. As John adjusts to self-driving cars and having sex wearing helmets, he pairs up with Lenina Huxley (Sandra Bullock), a bored cop with a nostalgic fascination for 20th-century culture.