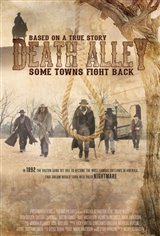 Death Alley is based on the true story of the infamous Dalton Gang in their quest to become the Wild West's most famous outlaws. Hell-bent on upstaging their cousins, the Younger Klan and Jesse James, the brothers set out to do the unthinkable—rob two banks in one day in one town at the same time.

With the ever-pressing U.S. Marshal Heck Thomas right at the their heels, the criminals decide to invade the quiet, peaceful business community of Coffeyville, KS. As the crime develops, the plans begin to fall apart as the "no-guns" city ordinance is quickly disregarded by the town's citizens, who take arms to defend their life savings and their families from the notorious robbers.